Coconuts play a minor role in Disney's 2016 film, Moana. In the song, "Where You Are", the villagers of Motunui say how they can build fires, eat the meat in their tree's leafs, and drink using the coconuts. One of the sighs that Te Kā's had reached Motunui was when they had started to go off from the inside of the shell, making them unable to eat.

Maui also describes how he "killed an eel, buried its guts, sprouted a tree, now you've got coconuts," in the song "You're Welcome." 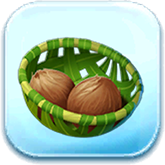 Add a photo to this gallery
Retrieved from "https://moana.fandom.com/wiki/Coconuts?oldid=9740"
Community content is available under CC-BY-SA unless otherwise noted.