Dwayne Douglas Johnson (born May 2, 1972), also known and sometimes credited by his ring name "The Rock", is an American and Canadian actor, producer and professional wrestler who works for WWE.

He is widely known for playing Luke Hobbs in the Fast and Furious movies as well as Roadblock in G.I. Joe Retaliation.

For Disney, he has played Joe Kingman in the 2007 Disney family sports comedy film The Game Plan, and Jack Bruno in the 2009 Disney science-fiction/thriller film Race to Witch Mountain. He also has the role of Maui in the 2016 film Moana and an unknown role in Jungle Cruise.

He also appeared as himself in Cory in the House, Hannah Montana and Wizards of Waverly Place and as an air marshal in You Again. 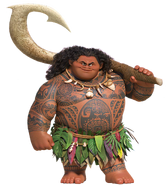