The Kakamora Chief is a supporting antagonist in Disney's 2016 Moana. He is the leader of the Kakamora.

Role in the Film

A minute or two later, as Moana fights the Kakamora, one Kakamora attempts to shoot a dart at Moana but misses, hitting Kakamora Chief instead. He then falls to the ground. 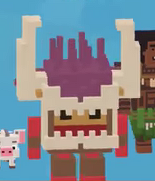