“Don't worry, it's a lot farther down than it looks.”
―Maui before entering Lalotai

Lalotai is a realm inhabited by monsters. It appears in Disney's 2016 Moana.

A magical underworld of wondrous beauty, Lalotai is the home of legendary demons and monsters. Few mortals have ever been there, but this is where Maui's fishhook is- and Moana is determined to find it.

Also known as the Realm of Monsters, the entrance to Lalotai can be accessed atop a high mountain on a remote island. The entrance is described to be a mile-high spire in the the junior novelization. The entrance is a face which opens at the mouth when hit hard enough. The passageway (a pit) leads to an undersea environment home to a number of exotic, demonic and ferocious creatures — one of which being Tamatoa, a villainous giant crab. Other inhabitants include the Sloth monster and frog monster.

Lalotai's entrance was covered with dirt. The only way to find the entrance is to get rid of the dirt, which Maui did by using his insanely powerful lungs to blow a gust of wind at the dirt creating a big dust cloud.

To unlock Lalotai's entrance, one must perform the haka followed by a forceful ground smash. The necessary impact of the smash implies that Lalotai's entrance can only be accessed by beings with supernatural strength. Once the entryway is opened, a purple swirling vortex opens up.

One can exit Lalotai by simply swimming to the surface, or by being blowed up by geyser - like jets of water. This will directly take you to the surface. Even monsters may be launched to the surface by water jets.

Portal to the monster realm 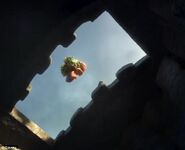