Shiny is a song of the Disney animated feature Moana. It is sung by Tamatoa as he arrogantly flaunts what he believes to be his most beautiful qualities, particularly his shiny shell.

Did your granny say listen to your heart?
Be who you are on the inside?
I need three words to tear her argument apart
Your granny lied

Don't you know
Fish are dumb, dumb, dumb
They chase anything that glitters
Beginners

Oh, and here they come, come, come
To the brightest thing that glitters
Mmm, fish dinners

I just love free food
And you look like seafood

Well, well, well
Little Maui's having trouble with his look
You little semi-demi-mini-god
Ouch! What a terrible performance
Get the hook! (Get it?)
You don't swing it like you used to, man

Yet I have to give you credit for my start
And your tattoos on the outside
For just like you I made myself a work of art
I'll never hide, I can't, I'm too

Shiny
Watch me dazzle like a diamond in the rough
Strut my stuff, my stuff is so
Shiny
Send your armies but they'll never be enough
My shell's too tough, Maui man

You could try, try, try
But you can't expect a demigod
To beat a decapod (look it up)
You will die, die, die
Now it's time for me to take apart
Your aching heart

Maui!
Now it's time to kick your hiney
Ever seen someone so

Shiny
Soak it in cause it's the last you'll ever see
C'est la vie mon ami, I'm so
Shiny
Now I'll eat you so prepare your final plea
Just for me 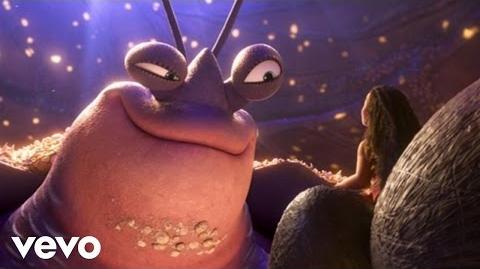