The Sloth monster is a minor villain in Disney's 2016 Moana. It lives in Lalotai. The Sloth Monster is purple with a masked-like face and appears to have multiple arms, ended in clawed hands. The creature's body appears to be covered in purple fur.

Role in the Film

The Sloth Monster appears when Moana is being attacked by the dangerous creatures in Lalotai. Sloth Monster was hiding from Moana when, to Moana's surprise, it comes out of his hiding place and leaps toward Moana. However, right as it jumps at her, it gets blasted away by a geyser, being shot up into the ocean. 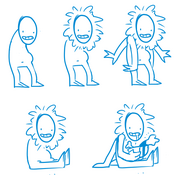